An update from the Engineering Team

All notes and pictures supplied by Matt Holloway

Behind the scenes the final touches to the CAD models and Manufacturing Drawings for the Cylinder blocks have been finished and await final approval by Premier Patterns who will be manufacturing the new block. Following a trip up to see Premier Patterns, and ironing out any nagging issues, we should hopefully be at the point for seeing a set of freshly cast blocks appearing in the yard at Sheffield Park some time this year!

Following some test welding on the RHS plate, which resulted in localised cracking, and another survey being taken on the state of the frames as a whole it has come quiet apparent how corroded the rear section of the LHS plate really is as well as the hap-hazard material Spec of the original plates (Remembering that in 1910 steel quality standards and composition did not exist as we know today!) Thus resulting in issues with trying to weld new steel to the unknown original steel frames!


Also to create an effective repair at least a 1/3rd of the rear of the LHS would need to be replaced as well as a section of the RHS plate of about 3ft!


With this in mind and the cracking of the test welds quotes are being sourced for the cost of a set of new frames plates.


Once we have an estimated cost for a new set of frames a comparison of the cost and future reliability of repairing the old frames, using more specialised welding Rods and material analysis of the original frames, against manufacturing a new set will be made.

Progress on the small part restoration....

This is a small selection of the work we are currently carrying out with the assistance of your support and donations.  For this and more extensive work to carry on we need your continuing support.  Our thanks go to the engineering team for continuing the work in sometimes plainly awful conditions, to those of you who support their efforts and to everyone who has helped us get to where we are in whatever way they have.

Clive D. Emsley
Chairman - The Fenchurch Fund
Project Manager - PROJECT 27
A Sub-Committee of the Bluebell Railway Preservation Society
www.bluebell-railway.co.uk
http://wainrightsfinestsecr27.blogspot.co.uk/
Why not support us by making a donation at
http://www.justgiving.com/Project27
Or for Text donations Simply text "FENC72 £10" to 70070 to donate £10
- you can donate £1, £2, £3, £4, £5 or £10;
- you can also elect to Gift Aid your donation;
- your operator's standard text charge applies.

Well, what a year it has been!  Whilst there was not too much difference to be seen on the outside, there was plenty done behind the scenes. This ranged from cleaning and painting to the manufacture of new part.  The overhaul of the steam reverser has continued throughout the year, and of course there has been many sales and information stands during the year. 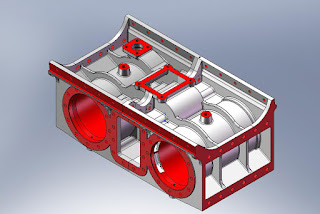 The drawings for the cylinders were completed to a stage where they could be checked for shrinkage and tolerances.  These have been prepared by Matt Holloway. Since the beginning of the year matt has also prepared drawings for the frames which were passed to us around Easter time. Later in the year Matt surveyed an original SECR buffer and prepared drawings for it.  He has also surveyed a bunker side which will be drawn up when time permits.  For his efforts, Matt was presented with the “Freddie Webb Award” at the loco department annual meeting, we congratulate him on this honour.


Thanks must also go to Roger Cruise, Keith Sturt and Fred Bailey for their help in researching drawings at the NRM and also for helping with the checking of Matt’s efforts.


Many hours of cleaning and painting of parts large and small has been carried out during the year.  The list of things being processed seems to be never ending, but we will get them all done! 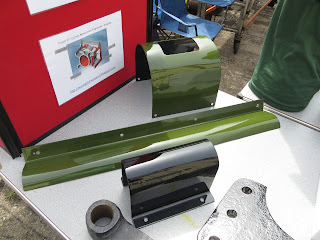 In April the wheelsets went off to South Devon Railway Engineering for tyre and journal turning together with ultrasonic testing.  They were returned to Sheffield Park in December.  These will now be cleaned and painted ready for the re assembly of the loco. 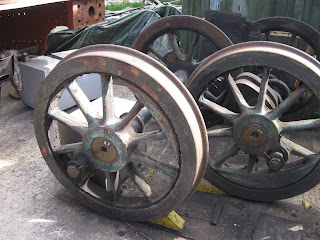 The Steam reverser overhaul has continued during the year being carried out by Ben Dingley and Ian Ferguson.  This has included machining of the existing parts and castings, together with the manufacture of new parts.  The overhaul is now nearing completion and hopefully will be tested shortly before being returned to the railway and being protected before being stored. 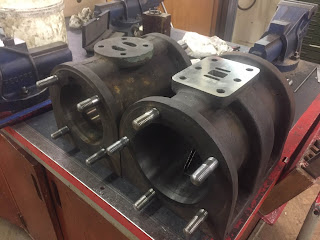 The final parts were removed from the frames in the middle of the year.  This included the valances and footsteps.  The valances will be used as patterns to construct a new set to be installed on the loco.  The footsteps are currently being cleaned and given a protective coat of paint.  The guard irons are also being given a coat or two of filling primer and being rubbed down to give a smooth surface before final painting is carried out.  This is being carried out by Jim Turtle. 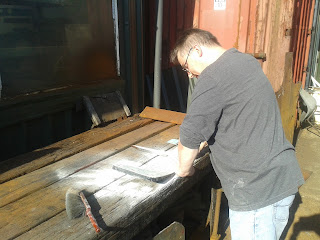 The sales and publicity side of the group has been busy over the last 12 months and we have had a very good year on the fundraising front.  As well as having stands at most of the “gala” days at the railway, we also attended two model railway exhibitions. At one of these we met up with Adrian Harrison, and Ex Bluebell Fire Department volunteer who now runs a model company.  He has kindly taken a selection of stock to other exhibitions on our behalf, and thanks are due to him for doing this.  It is likely that we will be at three exhibitions in Sussex this year, we not only raise the profile of the fund, but also the wider railway and groups on the railway. 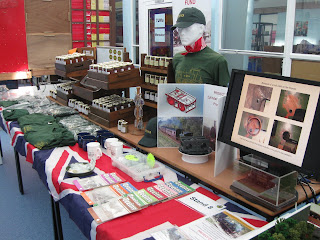 Thanks for reading and please come back at regular intervals!
If you would like to help us restore the locomotive to working order, we would always welcome donations however large or small for more details, please E mail us at the address below.

There is plenty going on behind the scenes and hopefully by the end of next week I will be in a position to let you know what it is!
We are planning our year as far as fundraising and information stands is concerned and we hope to be able to have stands at the following Bluebell Events:
Unfortunately the Southern at War Weekend and the Vintage Transport Weekend are not on the Bluebell's list of events for this year, which is disappointing as they are both popular weekends!


In addition to these events,  We have been invited to a few model exhibitions this year too!

This is an  advanced list and may be subject to change.

Keep popping back and hopefully by the end of next week there will be some news!
Posted by Project 27 at 06:12 No comments:

Is there anything happening?

Well, yes there is, but not too much that is readily visible!  Stuart has been carrying out some repairs to the roof of the Villa and there has been some restoration some of the smaller componentry.  On the fundraising front we have had a good year and are on our way to paying for a cylinder block, or at least the rough casting!  The wheel sets have been returned from the South Devon Railway and are now in "ready to run" condition (well, very nearly!).  there has been plenty of discussion on the restoration of various parts of the loco, including the frames.  It now looks likely that new frames will be the way to go.  Possibly no more expensive than repairing the existing frames and probably easier when it comes to the restoration.  The costs and practicalities will need to be finalised before we make the final decision.


I am about to put together a "review of the year and projection for the forthcoming year" together which will be published here first.  I am hoping to get this done by the end of January.

Clive D. Emsley
Chairman - The Fenchurch Fund
Project Manager - PROJECT 27
A Sub-Committee of the Bluebell Railway Preservation Society
www.bluebell-railway.co.uk
http://wainrightsfinestsecr27.blogspot.co.uk/
Why not support us by making a donation at
http://www.justgiving.com/Project27
Or for Text donations Simply text "FENC72 £10" to 70070 to donate £10
- you can donate £1, £2, £3, £4, £5 or £10;
- you can also elect to Gift Aid your donation;
- your operator's standard text charge applies.
Posted by Project 27 at 04:43 1 comment: