A Good Start to the Year

We had a good few days at the Flying Scotsman event talking to the visitors and selling the usual quality merchandise.  Our stand was situated in the yard which on one hand was great for showing our visitors what we are up to, but on the other hand we were in direct line of fire for the loco exhaust! We had many visitors who took an interest in our project and quite a few donations.


Following on from this we had a stand at the Branch line weekend (this time on Platform 1!) we again had a good time talking and selling as well as taking donations.  It was great to see both the other two P class locos working for their living pulling trains up and down the line as well as offering brake van rides at Horsted Keynes.


Since Branch line weekend, it has been announced that 323 Bluebell will be travelling to the Severn Valley Railway for their Autumn Gala, and 178 has already departed to York for use on their brake van rides.  A good advertisement for the Bluebell.


We had a slight disappointment at the AGM as we were unable to launch the replica LBSCR 1st World War service badges, unfortunately the production process has taken longer than we had hoped. They will be available soon exclusively from Project 27 for a price of £14-50.  This is a strictly limited edition of 100 pieces and will clearly be marked as a replica on the reverse.


We have also done some physical work on the loco!

Matt has been working away on the wheel sets and has turned his attention to the crank axle.  he has been beavering away at the build up of gunge and cleaned back to bare metal.  He uncovered a makers mark on the axle as seen in the picture.  This shows the axle as being made by Vickers Sons and Maxim.  The material is shown as Cast Steel  made in 1909 for the SE&CR.  there is a works number of 22094 also.


Once the axle was fully cleaned down, a first coat of bondaprimer was added to the non bearing parts to give a good base for future coats of paint.  Being an axle the final colour will be red.  The bright work that can be seen in the picture are bearing surfaces and these have been protected by reapplying denso tape to them.
Also to report is the finished steam reverser direction change over valve cover, in mid bronze green, and the vacuum brake cylinder vacuum discharge and application valve casting.


In short the valve allows a vacuum to be created in the brake cylinder both sides of the piston. Once a brake application is made, introducing atmospheric pressure to the train pipe and bottom volume of the brake piston, a ball valve inside this casting closes due to a pressure difference.


This isolates the top of the piston of the vacuum brake cylinder leaving it with and almost perfect vacuum (zero pressure!!) and thus the atmospheric pressure acting on the bottom of the piston pushes up with no resistance from the now isolated  top half of the piston and applies the brakes through various levers, rods, etc.....it stops the engine!

Dave "The Marrow" Colwell has let me have some photos he took in the late 50s early 60s, amongst which is one of No 27 "Primrose" at the head of a train at Sheffield Park.  It also shows how Sheffield Park has changed in 57 years!
We are now looking forward to our next event at the "End of Steam" Commemoration.  Hopefully we will be in possession of the War Service Badges by then!

Our next new badge design!

We will shortly be in receipt of the replica LBSCR 1st World War Service badge I have been promising for 3 years!﻿ 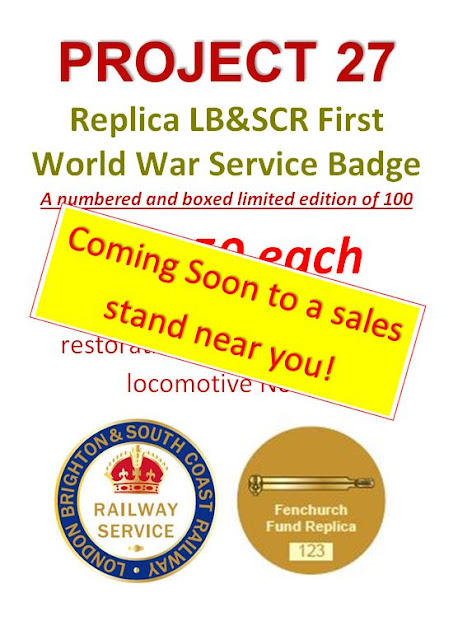 It is hoped that we will have them in time for the BRPS AGM on the 20th of May, but this cannot be confirmed at the moment.  Each badge will be individually numbered and presented in a collectors box.  The reverse of the badge will bear the legend "Fenchurch Fund Replica" and will have a modern broach fixing.  This is to differentiate these badges from the original ones which are considerably more valuable!

This is a limited edition of 100 pieces and they are sold to raise funds for the Fenchurch Fund, currently financing the restoration of SECR loco No.27 on the Bluebell Railway.

For further details please drop me an E Mail at  thefenchurchfuund@gmail.com

What are we doing at the moment?

There is plenty of small component restoration and overhaul going on at the moment, much of which is not immediately visible!  Matt and his trusty paint brush has been busy transforming age weary and dirty items into sparkling almost new looking items.  One example of this is shown in the pictures below, taken by Matt to show off his work!
﻿ 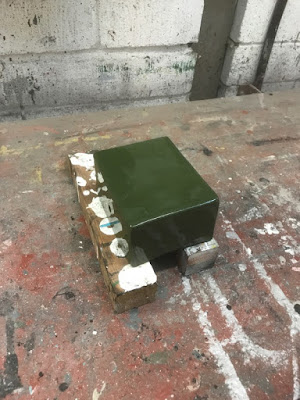 This item has been painstakingly cleaned, any rust removed, primed and then where required given a coat of filling primer, several coats of undercoat and several more coats of gloss.  The paint was flattened between coats to get a deep gloss finish.  All that is required now are several coats of varnish for a top class job.  Thanks to Matt for the time and effort that goes into this work.


We are close to getting a firm quote for a set of side plates to be manufactured for the frames.  Whilst this will make the loco slightly less "original" it will result in a 100 year restoration of the frames.  This, together with the new set of cylinders will result in a top quality restoration of the loco.  Once there is more news on the manufacture of the frame plates and cylinders it will be posted here first.  The only thing we now require for the cylinder manufacture is the approval of the Locomotive Director to order both our set and the set for 178.   It is hoped that the frame plates can be ordered shortly and delivered in the summer.  This is also dependant on the approval of the Loco Director. His  approval is just a matter of timing and will happen!


Our next Gala Sales and Information Stand

We will be attending the Branch Line Weekend on the 13th and 14th of May. The stand should be back in our usual position on Platform 1 next to our tank adjacent to the Bookshop. It would be good to see you and have a chat.


Thanks for your continued support, it is good to know that you are with us!