We had a good weekend at the Worthing Model Railway Exhibition last weekend.  We met plenty of old friends and made some new ones too! 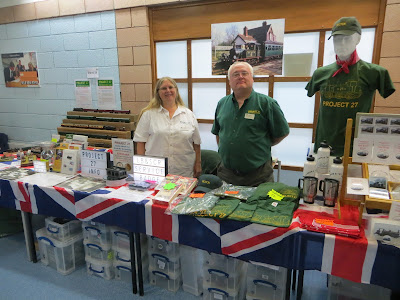 We put on a display of the restoration works we are carrying out at present, including someWe  pictures of the new cylinder patterns being constructed as seen in the previous post.  We had a reasonably good sales event and also managed to put on a small display of model trains that are typical of the Steyning Line, Bluebell Line and Uckfield line (with just a small amount of license!) 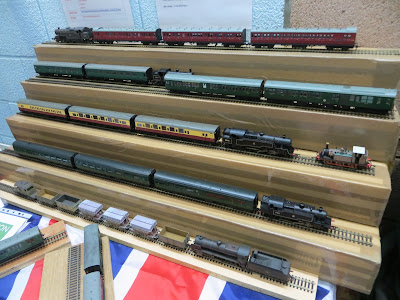 The models included the new birdcage set by Bachmann with a Fairburn tank pulling, an M7 on a pull and Push set, DEMU, 3 car sets with standard and Ivatt tanks and an N class with a train bound for Shoreham Cement Works!

There were also a selections of military models expertly constructed and weathered by Stuart Bardouleau on display. 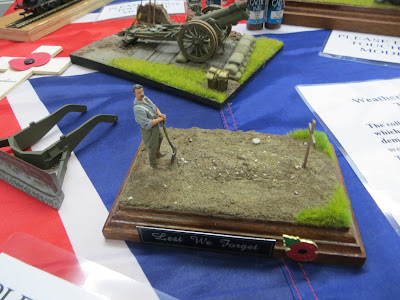 Thanks to all who came and spoke with us and popped a shilling in the collecting bucket!

We will next be setting up our stand at Sheffield Park for the Deltic Weekend and then a week later for the Shareholders weekend when you will be able to see the progress on the restoration in the Villa.  Please do pop along and have a chat with us, it makes the day go so much better!

Don't forget we still need to find the cash to pay to complete the restoration!  You can donate at: https://mydonate.bt.com/events/27
Posted by Project 27 at 05:18 No comments:

We have heard from Premier Patterns today.  The construction of the patterns has begun with the Left Hand side pattern. The process consists of sections being cut from blocks of pattern grade polystyrene and carefully numbered. These pieces will then will be "glued" together to form the complete pattern.
The picture below show some of the pattern components laid out on the pattern makers bench prior to being assembled together.   The bottom picture shows the beginnings of the construction of the pattern following some glueing and some test fitting of the pieces.  In the background of the picture you can see the CNC router which is used to cut the blocks of polystyrene creating a localised snowstorm!
The pictures were taken by Andy Timmins and are courtesy of Premier Patterns

We have also been informed that the 22mm (7/8) steel plate will be with the profiling department of Tata Steel in Walsall early next week and the cutting process will begin within the next 2 weeks.


We are hopeful that the technical team will be able to visit both factories to view the progress of the works.  Following this we will be able to give you even more detail of the process.

So, things are looking positive for a delivery before November!

Of course we still need to pay for these items,  especially as we were not initially expecting that the frames would need replacing!  If you are able to help us please E mail us on the address below, or use the text donation also shown below.

We are looking for pictures of 27 (or other P class locos) in SECR, SR or BR liveries.  There is a particular hole in the collection we have of the locos in Southern Black either in Maunsell or Bulleid condition.  If anyone can help us to plug this hole, or supply other pictures we have not seen, we would be extremely grateful.  All pictures will be carefully filed with the photographer/collectors name attached.  If we use the pictures they will be given the correct credits.


If you do have, or know the whereabouts of such pictures we can be contacted at: thefenchurchfund@gmail.com


If you would like to help us restore the loco,We have a BT my donate page and this can be found at: https://mydonate.bt.com/events/27


We can also accept cheques for any value either with or without a gift aid declaration.  If you would like a gift aid declaration form please contact us by E Mail and it can be sent to you. If you are not able to allow us to claim back the Gift Aid, please contact us and we will let you know the best way to donate.
For those of you in the modern age, we also have a text donation page for donations as shown below.
To donate £10 text "FENC72 £10" to 70070

- you can donate £1, £2, £3, £4, £5 or £10 just by changing the amount in the text massage.
- you can also elect to Gift Aid your donation;
- your operator's standard text charge applies.
Thank you for your continued support and interest in the project, hopefully you will see the fruits of everyone’s labours in around 4 years or so.

Having had a conversation with Matt on Saturday I can tell you that work is progressing well on the restoration project.

The eccentrics that were removed from the crank axle a few weeks back have now been thoroughly cleaned and the parts reassembled on the bench ready for machining.  The reason for this is that the eccentrics were worn and slightly oval.  When they have been turned this ovality will be removed.  It is hoped that this will be carried out within the next few weeks and then the non bearing surfaces will be painted before being reassembled onto the axles.

Tata Steel has told us that the cutting out and marking up of the frames is due to commence during the week beginning 18th of September.  The technical team will be on site to see the process at some stage during this time.  This will be a major step forward in the restoration, and should ensure that the chassis will be fit for a minimum of another 100 yeas service.

The progress with the cylinders is at a similar state and again the technical team will be visiting the Premier Patterns factory to view the progress on the same day as the visit to Tata Steel.  We are hopeful that these parts will be available to us shortly.


For the modellers of you out there!

Hattons models made an announcement at 10:00 this morning that they are to produce a 4mm scale model of the P class locomotive.  They will be modelling both the 1909 and 1910 versions in many liveries.  We are looking forward to seeing all of the models!  See their website for details http://www.hattons.co.uk/NewsDetail.aspx?id=188