Just a reminder to say we will be having a sales stand at this weekends Diesel Gala on the Bluebell Railway.  We will hopefully be situated in the loco yard close to our frames and wheels.  Please come along and visit us.


We do not anticipate having the new Sheffield Park Loco Shed badges on sale but will be able to take a reservation order. (no deposit required) during the event.  The badges will, pending problems, be available during the Flying Scotsman Event.


We are hoping to be open on all three days of the Diesel Gala and on the four days over the Easter Weekend of the Flying Scotsman Event.


We are also attending the Wealden Railways Group's model railway exhibition in Steyning on Saturday 22nd April.  We will be selling the usual merchandise plus some exciting new lines! Why not pop along and see what you can pick up!


Thanks for your continued support.

Coming Soon to a Sales Stand near You!

Feel part of the Team at Sheffield Park

Project 27 is producing a new badge to recognise the Loco Shed at Sheffield Park as the next in line of Brighton District Loco Sheds.  A 75H shed plate badge is being produced for us and will be limited to 100 pieces.  They will be for sale at our sales stand during the Flying Scotsman event at Easter (Friday to Monday only), depending on delivery.  They will be on sale for £5 each and all profits will go directly to Project 27. 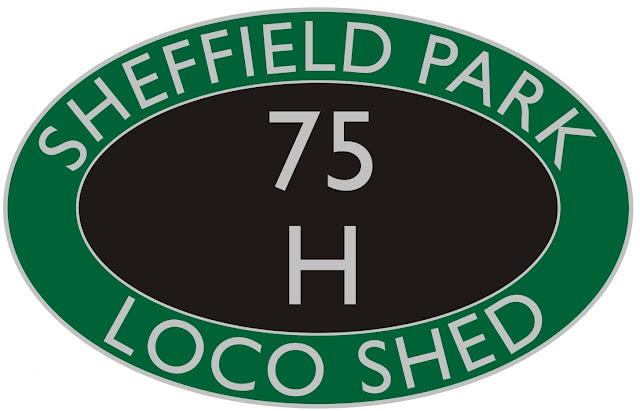 The badges will depict a shed plate surrounded by a green band with the words SHEFFIELD PARK LOCO SHED in it.  the letters and rings will be in polished chrome finish and then green and black will be in hard enamel.


If you want one but can't get to the Sheffield Park at Easter, please E Mail me and I will reserve one for you.


Thanks for your continued support of the project.

thefenchurchfund@gmail.com
www.bluebell-railway.co.uk
http://wainrightsfinestsecr27.blogspot.co.uk/
Why not support us by making a donation at
http://www.justgiving.com/Project27
Or for Text donations Simply text "FENC72 £10" to 70070 to donate £10
- you can donate £1, £2, £3, £4, £5 or £10;
- you can also elect to Gift Aid your donation;
- your operator's standard text charge applies.

Getting my hands dirty for a change!

Your culprit has just spent two days at Sheffield Park working on the project at the instruction of Matt Holloway, our Project Engineer.
It started with a simple phrase on Thursday morning "Could you needle gun the wheels, but you will need to clean the gunge off first".  A simple phrase, but of course nothing is ever that simple!  I spent about 5 hours scraping the congealed oil. dust and anything else that may be in the mix off  the backs of 1 1/2 wheels.  No needle gunning was carried out!
﻿
﻿
﻿
﻿
﻿
﻿
Not the most pleasant or exciting jobs to do, but without doing it the restoration would not progress!  Following the removal of the gunge, the next job will be to needle gun and wire wheel before painting.
The rear and centre wheel sets have been cleaned and needle gunned already and are waiting wire wheel treatment before painting. The right middle wheel has been given a coat of bondaprimer, which is a high quality primer to give a good base for the subsequent coats of paint. These were prepared by Matt and his band of willing helpers last weekend.
The pictures serve to demonstrate the amount of dirty, boring and menial, but vital, work that needs to be carried out before the sight of a pristine P class rolls out of the works in a couple of years!
My second day was still cleaning extremely "cruddy" items, only this time indoors.  As it was raining, I thought it would be more comfortable inside the Villas so set to on the cleaning of the cylinder drain cocks.  Not only were these disgustingly filthy on the outside there was a fair amount of detritus inside the ports.
There are five of these located on the cylinder block.  All of these are similarly gunged up or at least they were before I started! The congealed grease and dust was roughly scrapped from the castings before the split pins removed and the nut taken off to reduce the items into the 6 parts that make up the cylinder drain cock.  Each part was then meticulously cleaned using scrapers, paraffin and brushes.  the pictures below show the progress of the cleaning.
At Lunchtime I was joined by Matt who spent some time wire wheeling and painting a bit more of the middle wheel set.
Whilst Matt was using the wire wheel he discovered some makers stamps on the wheels and axles.  It seems that at lease the middle wheels were made in Germany by Krupp in 1910, whilst the front and rear axles were manufactured by Vickers Sons and Maxim Ltd.  Ironic when only a few years later 27 was in Boulogne doing its bit for the war effort and both Krupp and Vickers were supplying armaments to their respective governments!
So, a fun, interesting and informative couple of days with 27, and here's to many more!
Oh, and whilst I was waiting to get started someone dumped a P class in the loco yard!  Bluebell arrived back from its trip away. Almost a case of "here's one we did earlier!
Keep coming back to this page for all the exciting news about 27, and what is happening with the restoration.
Thanks for reading this far!
Clive D. Emsley
Chairman - The Fenchurch Fund
Project Manager - PROJECT 27
A Sub-Committee of the Bluebell Railway Preservation Society
www.bluebell-railway.co.uk
http://wainrightsfinestsecr27.blogspot.co.uk/
Why not support us by making a donation at
http://www.justgiving.com/Project27
Or for Text donations Simply text "FENC72 £10" to 70070 to donate £10
- you can donate £1, £2, £3, £4, £5 or £10;
- you can also elect to Gift Aid your donation;
- your operator's standard text charge applies.
Posted by Project 27 at 13:51 No comments: